Are You An Ambivert Personality? 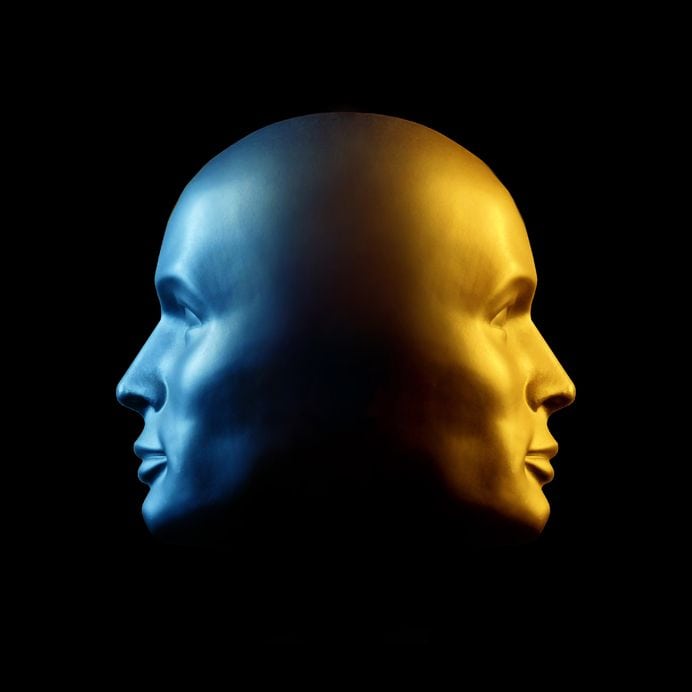 Introvert or Extravert. Some people feel like they just aren’t one or the other. They don’t see themselves as that boring, or that simple. This feeling of being caught between introversion and extraversion is also known as the Ambivert Personality.

Maybe, they love being with their friends, talking, going out to eat, seeing shows, and trying new things. What if they also love staying home, hibernating, losing themselves in a book or a game, ignoring their phone (and their Facebook feed), and being gloriously alone.

It can be really frustrating trying to reconcile a sense of complexity with the Myers-Briggs typing system, when it feels like it’s putting them in a straight jacket.

It might seem flawed and incomplete, and like it’s forcing them into a tiny box that just doesn’t allow for all the nuances of who they really are.

Most articles on this subject would pick a side: “Ambiverts exist!” Or “No. There is no such thing.” Funny enough (I do like a good contradiction ;)), we’re here to say… both.

It might surprise you for a hardcore personality type nerd, like me, to say this, but: Myers-Briggs letter system (You’re either I or E, F or T, etc.) is overly simple. ¨All it takes is four letters to wrap up your whole personality in a nice neat bow!¨

What Came Before Myers-Briggs? 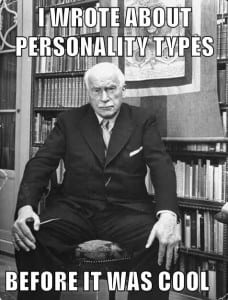 A lot of people don’t know that Myers-Briggs is actually a mainstream version of something more complex: Carl Jung’s work, Psychological Types.

Carl Jung was a contemporary of Freud, and his work had an enormous impact on modern psychology, among other things. (Fun fact: he was played by Michael Fassbender in the 2011 film A Dangerous Method.)

The Myers-Briggs system was intended to help decode his more nuanced, but somewhat more complicated, explanations. They  (Isabel Briggs Myers, and her mother, Katharine Briggs) wanted to make it easier to understand and more useful to people, in general.

And in some ways it really worked.

It’s easy to see how well-known this concept of a 4-letter type is (ISFJ, ENTP, etc.), especially compared with Jung’s concept of cognitive functions.

While the 4-letter type can be kind of a name, meant to describe a personality type as a whole, cognitive functions describe individual mental processes.

So, rather than treating a personality as one solid chunk, it looks more finely at the pieces that make it up. (Myers-Briggs does this, but in a much more general way).

How Do Cognitive Functions Influence the Ambivert Personality? 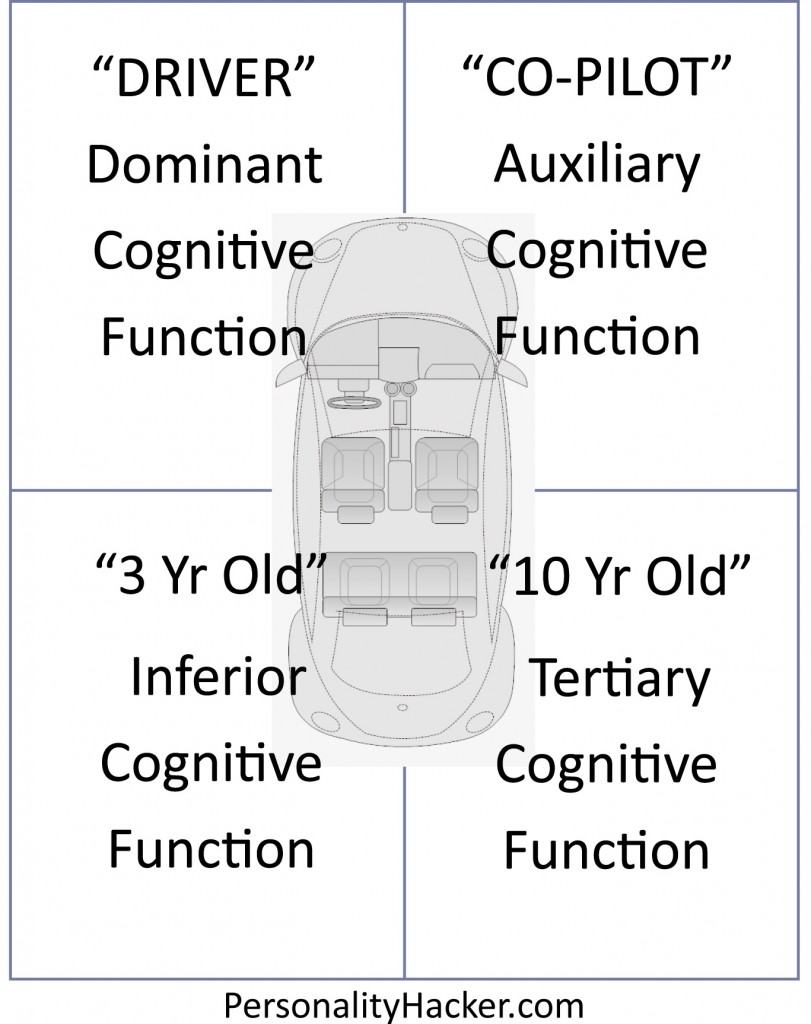 We like to use the car model to illustrate how this works. You have 2 functions in the front of the car, one Introverted and one Extraverted, (and 2 in the back, one of each as well).

Basically, someone being an Introvert or an Extravert, only says which one is driving the car.

The order of the functions, which one is in which seat, is what makes one personality type different from another. People like to think of the order in different ways. Some understand it with the idea of preferences, similar to what kind of ice cream is your favorite.

What if you don’t want to pick just one?

For me, a better way to think of it is like your personality is a pack of wolves.

Wolves have a hierarchy; a pecking order. There’s always a top dog. They all have a place in the pack, though.

The Alpha wolf is the leader, but it’s not the only one that matters. A good leader looks out for the others, helps them, supervises them, and also allows them to use their abilities so they can all work together to care for the group. Everyone is useful.

So, saying you are an Introvert or Extrovert is only describing the function you drive or lead with. You have both, though. You need both.

It’s healthy having development in both your inner and outer worlds. To be well-rounded, balanced, and whole we need access and relationships to both. We’re better off if we have the ability to be both Introverted and Extraverted.

Here’s a real life example: Joel, is an ENFP. Going back to the car model, he has an Extroverted driver function. We call it Exploration, but it’s also known as Extraverted Intuition (or Ne). He uses it to look for patterns in the outside world.

Joel’s copilot function, in the front passenger seat, is Authenticity (aka Introverted Feeling or Fi). It is about core values, what he finds to be important, how he feels personally, his personal identity, his personal intentions.

Joel has noticed that he used to be typically recognized by others as an Extravert, but lately people have, on first impression, seen him as being more Introverted.

His Introverted copilot is the part of himself that he’s working on developing. So, he is still technically an Extravert, but he is developing a more nuanced version of himself, one that uses more of a balance of both Introversion and Extraversion.

How are Introversion and Extraversion Misunderstood?

Some misunderstandings of Introversion and Extraversion seem to come from the idea that they are about being social or not. But, this isn’t always the case.

Some Extraverted functions aren’t necessarily social. Sensation, our nickname for Extraverted Sensing (or Se), has a lot to do with outer world experiences, action, and also aesthetics. Physical action or sensory activity can involve other people, since they are part of the outside world, but it doesn’t need to. Working out, drawing, or cooking are all activities that can engage Sensation, but don’t require other people.

Similarly Memory, Introverted Sensing (or Si), doesn’t always mean being away from people. It has a lot to do with physical comfort, relaxation, and safety. Also, familiarity, habit, and nostalgia. Getting a massage, remembering old times, or carrying on a tradition are all things that can engage Memory, but could easily involve other people a great deal.

It’s really about where each process is directed. Sensation is more attentive to outward stimulation, while Memory is attentive to more internal and subjective experiences.

We often say things like, “I am an Introvert” or “She is an Extravert.” Regardless of the implications of this kind of language, being an Introvert or an Extravert is not your identity.

The Road is Not the Map

Your personality type is not your identity. It’s just a map. Like other maps, it’s purpose is to simplify the picture so you can get a better idea of where you are and where you can go. They help you see what the area looks like and what obstacles you might have to deal with. 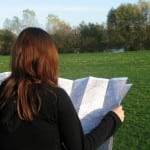 There is so much more to you than one system or description. Don’t mistake your identity for some 4 letter code, or even your functions. It’s just a starting place to understanding the skeleton of your mind. It’s part of your mental structure, and some of the pieces of it, but there’s a lot more to you than your bones.

Sometimes people find a flaw and want to throw out the whole system, but honestly that’s an overreaction.

A map doesn’t have to have every detail and every piece of information in existence to be useful. No map includes every detail of the real life version.

Using a map as though it’s a literal representation of the real thing might be unreliable, and it will probably be frustrating. That doesn’t make the map any less useful, if you realize what it really is and use it properly.

That’s why we’re interested in a lot of different systems and models for understanding how we work, and for personal growth. We talk about the Graves Model, Maslow’s Heirarchy of Needs, the Enneagram, etc.

Personality type is just one system. If you’re looking for something that’s not on one map, or you want a bigger view, or maybe a closer look, you might be able to find it on a different map.

Share
Pin
Tweet
Share
0 Shares
Are You An Ambivert Personality?2015-06-022017-04-11//personalityhacker.com/wp-content/uploads/logo-dark.pngPersonality Type and Personal Growth | Personality Hackerhttps://personalityhacker.com/wp-content/uploads/personalityhacker-com_ambivert_personality_faces.jpg200px200px
About
Jenna DeNardo
Jenna is a natural troubleshooter and overuses the word "understand." From her early teens, she was curious about people patterns, and why certain people seemed to be recognizably and predictably similar. She was introduced to the MBTI as a teenager, but was overwhelmed and hindered by her own lack of identity. A decade later, she was reintroduced to it at a crucial point in her life, and became obsessed. She's been analyzing and exploring personality systems, especially cognitive type, for several years. She is still an avid learner.
Showing 5 comments 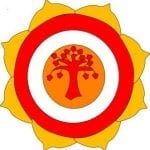 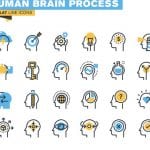