How Do You Jerk the Wheel?

I was on the Interstate the other day when a car started to change lanes right beside me. I was passing in their blind spot, and they neglected to look over their shoulder until they were already moving into my lane. I swerved. The only problem was, I was going 75 miles an hour, and the swerve became a jerk, which could have resulted in a flip if I hadn’t quickly regained control.

It was a rookie mistake, and I knew it. I was embarrassed and spent the next few miles calming my heart, imagining how bad it could’ve been, and calling myself stupid for swerving instead of hitting the brakes and slowing.

The other driver saw me just as I swerved, moved back into his lane, and waited for a better opportunity to change lanes. I was the one who made a mountain out of a molehill.

What Made Me Jerk the Wheel?

I’m 47 years old. I’ve been driving for decades, and I consider myself a pretty good driver. I’ve never had an accident, and my last ticket was in 1999. Still, I knew I had made a boneheaded mistake.

For the next 24 hours, I kept imagining what could have happened. I saw my new car repeatedly flipping in the middle of a Maryland interstate, involving other motorists in a chain-reaction collision. Somebody could have died. What the hell, Charis?!

What was my mental state at the time I jerked the wheel? I was thinking about what a good driver I was and how much I Iove cutting in and out of traffic at high speeds. I was feeling superior — and passing someone on the right, I might add.

We’ve all had those days where we felt pretty sure of ourselves only to have the universe remind us that we are mere mortals. It’s a delightful check and balance system that keeps us from getting too big for our britches. This one could’ve been much worse than posting an unpopular opinion on social media and being dogpiled on, however (my usual way for keeping my ego in check). This little ego check could’ve been life-altering — or life-ending.

I started asking myself some questions.

Why am I so bothered by this?

That’s it! That’s the thorn that keeps pricking me. My ego will rise again. (Hopefully. It’s nice to see yourself as competent, as long as it’s not a false assumption.) But what will happen the next time I jerk the wheel? How can I guarantee I won’t jerk the wheel again?

Only if I can explain why I jerked the wheel.

I started seeing all the ways I have jerked the wheel (metaphorically) in my life.

I’m an INFJ. INFJs do this thing called The INFJ Door Slam (aka Jerk the Wheel). Someone triggers our spidey sense, in one way or another, and we swerve away from the relationship with such swiftness it leaves most people bewildered. One minute we’re there the next minute we are history.

I’m not here to demonize that tendency of INFJs. Sometimes our intuition picks up on clues our conscious mind is unaware of. If our intuition tells us to run, we should… walk, not run, to the nearest exit.

The INFJ door slam still doesn’t require us to jerk the wheel, though. We may tend to do that, but it would probably behoove us to honor our intuition by gaining more evidence to support the intuitive message. Sometimes advanced pattern recognition is spot on, and sometimes it is a defense mechanism that is doing us more harm than good.

So, don’t jerk the wheel. Slow down, check your blind spots, then change lanes if necessary in a controlled manner.

How else do I jerk the wheel in my life?

“I Get All My Exercise By Jumping to Conclusions…”

I tend to jump to conclusions or make assumptions on very little evidence.

Sometimes I become so convinced in the power of my intuition that I forget I even have blind spots. But I do. Even the most evolved and aware people (which I am not) can still project their insecurities onto other people. We are all a work in progress. Like onions, we peel away a layer and hope to God we are done with some cankerous neurosis only to find another stinking layer. We are making progress (even though it sometimes feels like we’re not), but some of these issues are so deeply embedded, it takes consistent effort to kill them at their core.

For instance, say you have issues with intimacy, and it’s affecting your marriage. You can bet those issues preceded your marriage. You may remember some stuff that you experienced in your 20s or teens that may have contributed to it, but chances are the onset was long before when you were establishing your perceptions of the world and your place in it. This stuff often comes from early childhood, and when you finally touch it, your response may (should?) be childlike. Sobbing, screaming, rolling on the floor… this is no time to act like an adult. The reason this stuff has been affecting you for decades is likely due to the fact that you weren’t permitted to express the injustice you felt at the time it happened, in the way that felt right.

I can’t tell you how many times as a child, I heard, “Stop crying, or I’ll give you something to cry about.” This never made sense to me. I was crying because someone had already given me something to cry about. Giving me more reasons to cry wasn’t going to have the opposite effect. Nonetheless, I learned to swallow the grief, pain, and anger so I could deal with them again at the ripe age of 47.

The question was, how often do you jerk the wheel by making rash judgments of people who tripped one of your deepest wounds unknowingly? We are all a minefield of injuries, narratives, and limiting beliefs. Somebody stumbles onto one of our landmines, and we are suddenly jerked into an emotional flashback.

These flashbacks are easier to spot than you think. If your reaction is way out of proportion to the “crime,” you may be in a flashback. Other people call these triggers. (I have learned to hate that word because it has become a catchphrase for anyone who thinks their feelings need to be honored above anything else.) We are all adults. As adults, we are expected to ‘deal with our shit.’ So, when somebody trips one of your landmines, step away and analyze where the feeling is coming from.

I am feeling an intense emotion right now. It seems out of proportion with the situation, so it must be triggering a deep wound from my past. Are there other times I can remember responding this same way? What is the common denominator? When can I first remember it happening to me? How is the current situation different from that first situation?

Usually, the current situation is different because you are now an adult, not a powerless child with a developing ego. You have the tools of an adult. Instead of involving other people and creating a chain reaction collision on a crowded interstate, you can take the next exit. When I am in a full flashback, I usually have to isolate myself, meditate, journal… or accept the fact that the day is shot, and hopefully, the next day will be better. It’s amazing how many problems a good night’s sleep can solve.

These flashbacks are no joke. The deep ones can last days. Many of us live the majority of our lives in a flashback of insecurity, fear, and limiting behavior. We can’t figure out why our lives seem so much more difficult than they should be. But once we start working on our flashbacks, we can begin to spot them, and the more we work through them and give ourselves the nurturing we need, we can shorten their duration and intensity.

So, in conclusion, this is how I “Jerk the Wheel.”

I get a little too arrogant and start seeing myself as a transcended master who is no longer concerned with human foibles.

The truth is, I will keep making mistakes until the day I die. In fact, the only way to avoid mistakes is by never leaving the house, never engaging with people, and never having intimacy. That sounds like death. A much better approach is to keep pushing my comfort zones, so I make mistakes every day and avoid delusions of grandeur. I’m a safer driver, a better friend, and life never becomes boring.

I need to honor my intuition, but I should avoid making sudden moves without checking my blind spots.

In other words, make sure the information my intuition is providing is accurate and not peppered with projections and fear. Do this by slowing down and gathering the data to back up (or refute) your intuitive sense. Be open to being wrong. (It’s a lot easier to be wrong if you didn’t make a mountain out of a molehill by involving a lot of other people.)

Recognize your landmines are your concern and not the concern of anyone else.

When these landmines are tripped by someone or something, have a protocol in place that allows you to manage the infantile emotions that often come up. Basically, handle your stuff like an adult. Avoid chain-reaction collisions.

Finally, has this exercise helped me avoid any future disasters?

I have no idea, but it was informative and it forced me to dwell on the subject long enough that my muscle memory may take over and make me think twice the next time life triggers a jerk of the wheel.

So, how do you jerk the wheel?

For more information on dealing with emotional flashbacks, read:

Complex PTSD: From Surviving to Thriving: A Guide and Map for Recovering from Childhood Trauma by Pete Walker

And for more information on the importance of expressed emotion, read:

The Tao of Fully Feeling by Pete Walker 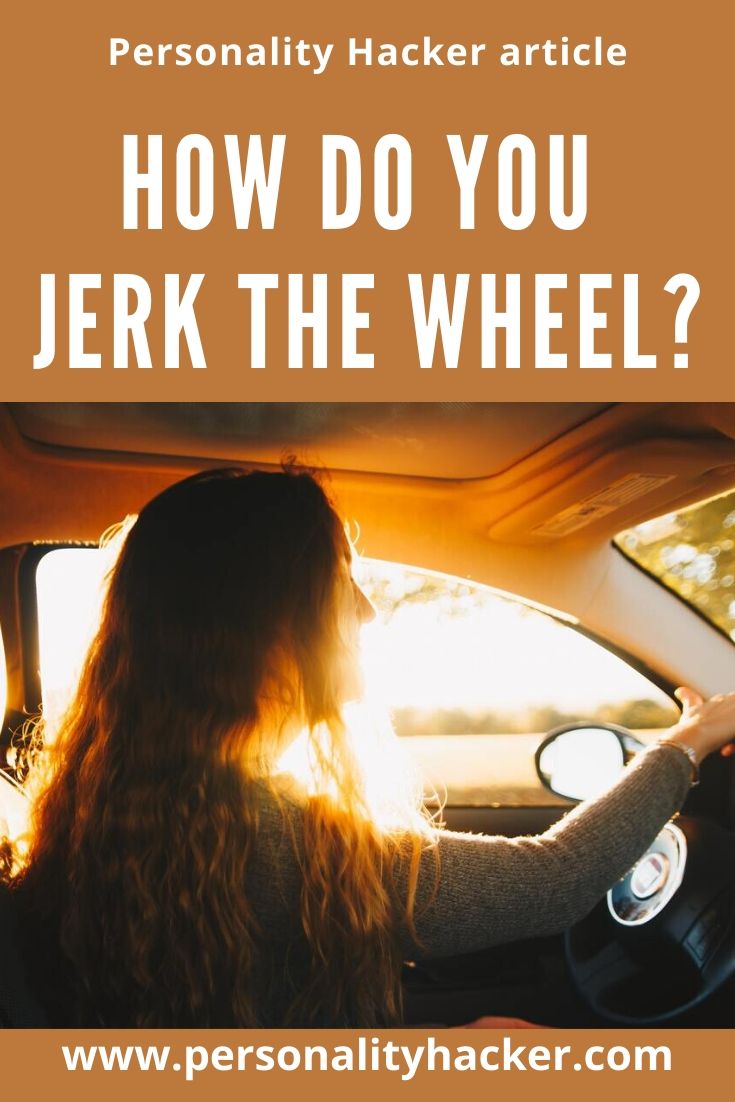 Share94
Pin3
Tweet
Share
97 Shares
How Do You Jerk the Wheel?2020-03-122020-03-13//personalityhacker.com/wp-content/uploads/logo-dark.pngPersonality Type and Personal Growth | Personality Hackerhttps://personalityhacker.com/wp-content/uploads/imageedit_8_8810125592.jpg200px200px
About
Charis Branson
Charis Branson is an INFJ. She learned the Myers-Briggs system by working and studying with Personality Hacker for almost ten years. She currently uses her skills in typology to help people find the best versions of themselves. For more information on Charis's coaching practice, visit her website at charisbranson.com
Showing 17 comments 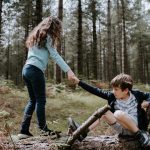 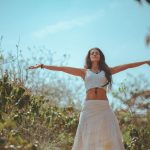 Podcast – Episode 0322 – Keeping Calm When The World Is In ChaosFeatured, Home Featured, Podcast