The Enneagram Types Of The INTJ

Hey, INTJs. My name is Erik Thor, and I explore original theories on personality psychology & the MBTI. Today I’m writing a guest article for Personality Hacker about you. Personality Hacker often refers to the INTJ as a Mastermind. But no pressure. You’re may be just starting out, and you have your entire life ahead of you to make your dreams happen, whatever they may be. To borrow from Personality Hacker, you are a person that values “Perspectives” (Introverted iNtuition) and “Effectiveness” (Extraverted Thinking). We’re talking how you see the world, and we’re talking how you translate that vision into reality.

Beyond this, I would also add that the INTJ is a philosopher and a critic. Hidden in these terms is a need to get behind things and to know how they work, and a need to understand the shape and secret fabrics of the world. For example, you might be noticing hidden and original methods and more subtle strategy, and you’ll often be more comfortable behind the scenes than say, an ENTJ.

Now, growing up, you may have come to hide or cover up parts of your core setup. Some of these gifts may be unknown even to yourself, or maybe, you’re not using them as well as you could. Society does not know how precisely to accommodate the different types, and your parents and teachers may not have been able to help you figure out how to use your unique skills to your advantage.

I have spent a long time identifying different development styles within a personality type and common ways an INTJ may learn to function. Today, I will use the Enneagram to describe these styles. Knowing your Enneagram type, you can know what parts of being an INTJ that you are the most in touch with.

The INTJ-1 is a visionary first and foremost. But this INTJ is almost perfectionistic in executing this vision, and far too focused on appearances. As an INTJ often grows up more focused on how things work than on how things appear, they may often have experienced scoldings for not dressing up their ideas in nice jargon and flashy designs. Because of this, some INTJ-1s, such as Steve Jobs*, came to channel their vision in a way that would make it more popular, using fashion, marketing, and secret techniques to promote their innovation. Still, because an INTJ-1 never sees any primary value in things that just “look good,” there is dissatisfaction in this tendency. INTJ-1s never really feel happy with how things turn out, and they may feel that no matter how much they put into improving their presentation, things never turn out the way they had imagined it.

You might not think this type exists but think again. An INTJ-2 is channeling this caregiving, nurturing instinct into managing and overseeing a system. INTJ-2s may be experts, better than most, at parenting, systems management, or at their workplace. The INTJ-2 is often someone people come to for advice and help when the project runs into challenges. The INTJ-2 responds by helping out directly to ensure things go smoothly. An INTJ-2 may appear almost irreplaceable because they are the only ones that can manage the system. But at times, the INTJ-2 may have issues delegating responsibility to other people, thinking they must do everything on their own.

The Enneagram 3 INTJs will be putting the most focus into their ambitions and their goals. They might be an aspiring architect, engineer or programmer, or someone that strives to be the best of the best in their field. But no matter how hard the INTJ works, they may feel that other people don’t notice their effort. So, borrowing from their Extraverted Sensing, they may push to be overly on, attentive, and present. They may speak louder than they are comfortable and put themselves in situations that they dislike if it gives them a chance to further their goals. But in pushing themselves like this, the threes may feel frequently frustrated, as if no matter how much recognition they get, it’s never enough. There’s a tendency in this type to overwork and push themselves too hard, and a need for the INTJ-3 to learn to gain recognition from their skills and their unique perspectives. But this gift can also be channeled into comedy. The INTJ-3 excels at gaining attention for their expertise through humor and their ability to get a crowd to pay attention to them. George Carlin* is an excellent example of an INTJ-3. Notice how unusually loud and engaging he is for an INTJ.

An INTJ-4 will often be a misfit, contrarian, and their fashion sense is usually rebellious. They may be pulling somewhat from Extraverted Feeling, but they use it aggressively, as a statement to society. (For more information on Shadow Functions, please reference this podcast.) The statement is: “I am going to be my own person, and I don’t care what you think.” There is a desire to avoid control here, and a tendency to distrust others. They might be obsessing about what other people think of them and may feel a tug to “prove others wrong” for things that had no basis in fact. Still, there is a high originality in this type and an ability to bring up unique perspectives and viewpoints. At times, the INTJ-4 is the person that listens to alternative music and dresses in alternative, all black clothes. Think actors like Rooney Mara.*

An INTJ-5 may be unusually focused on developing skills and abilities to fit in better with society. Sometimes, INTJs may feel that they’re not “good enough” to function in society like normal people, and that to succeed, they must study harder than everybody else. Often, this self-study pulls the INTJ away from other people and proactive pursuits. Through this study, if the INTJ can come out ahead, they can gain unusually high levels of skill and abilities. The INTJ-5 is also the most perceptive and aware of all the INTJs. The INTJ-5s tend to make amazing researchers, but these types are often difficult to understand and often isolated.

Their language is ambiguous to most people, and their conclusions are often untested and of a theoretical nature. I’ve worked together with many INTJ-5s, and their intelligence and giftedness were often off the charts. At the same time, I think they sometimes hid away from the world with their jargon and complex technical terms. I believe that, if an INTJ-5 can turn their perception and awareness towards the real world, they can accomplish amazing things.

An INTJ-6 will be reigning in their Extraverted Thinking because they believe their passion and ambition will somehow take them away from their friends and responsibilities. Afraid of letting people down, the INTJ-6 is often asking questions to ensure that their friends, family, and coworkers are well. The INTJ-6 is also prone to overworking themselves for others and taking on too many responsibilities to keep their friends and family happy. Their family obligations often prevent them from spending time on their career or personal goals. The INTJ-6 is probably the INTJ with which I have had the most positive experiences.

As an INTJ-7, it’s all about maintaining speed and swiftness, and you could call this type “too effective” as their thinking is in overdrive. The INTJ-7 may be sloppy or too quick in their work, rushing through or making a joke out of mistakes and errors in their solutions. Because INTJs tend to be serious, thorough, rigorous, conscientious and careful in their use of strategy, they sometimes receive criticism for never relaxing and just having fun with a situation. INTJ-7s turn this on end by feigning a carefree and goofy demeanor, often to get others to relax. But their humor and delivery are still usually aggressive, and the INTJ-7 often step on people’s toes.

You’ll find the INTJ-8 to be the most authoritative and the most likely to be in a leadership position. Driven by a need to supervise and to guide people towards positive action, the INTJ-8 is passionate, effective, and guided by perspective and a strong vision. At the same time, the INTJ-8 may be struggling with anger and frustration over past failures, and even anxiety, over mistakes they have made in the past. There is a tendency for the INTJ-8 to take this energy out on the environment, and the INTJ-8 may project and push their insecurities on other people. At times, take a second to consider if the things that upset you in others, are also reflections of things that you are upset over in yourself? A good example of an INTJ-8 is Frank Underwood* in House Of Cards. Notice how unusually extraverted an INTJ-8 can appear.

Often, this is the enneagram type of innovators and creative whizzes. But these INTJs are all ideas and no action. At times, your Perspectives process is blocked by the Exploration process. The INTJ tries to think of an idea, a perspective, or a plan that is all-considering and that accounts for every angle. Or they try to ensure that they’ve accounted for all possibilities and viewpoints. But in this, they end up feeling paralyzed by confusion. To overcome this, the INTJ-9 may consider finding a way to balance self, find their footing, and orient themselves in a world of ideas. The best way to accomplish this would be by engaging their Effectiveness process and channel their powers of innovation in a proactive pursuit.

Which of these Enneagram patterns do you see the most in yourself? How do you notice your enneagram type impacting you as an INTJ?

Want to Learn More About the Enneagram? Check out:

*Personality Hacker does not endorse any celebrity type guesses unless we have personally met the person and done a profiling session with them. Or, they have openly stated their type on record. 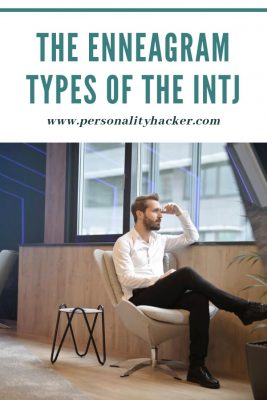 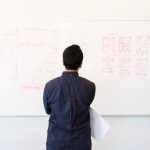 The INTP In The Grip Of The EnneagramEnneagram, Featured, Home Featured, Personality Hacker Blog